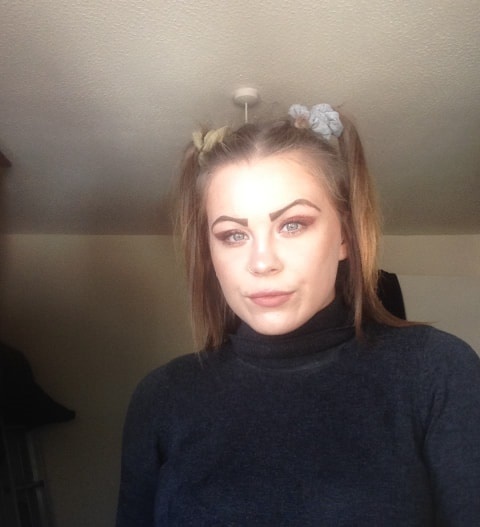 Keelie’s addiction and how one week in treatment changed everything

My name’s Keelie, I’m 20 years old and I was addicted to alcohol from July 2018. I smoked cannabis and used drugs when I was drunk. It all changed me as a person, leaving me to not have a care in the world. My personality changed. I became homeless and was getting myself into situations I never would have before – getting criminal convictions, having unnecessary fights, getting into debt, stealing, losing jobs, arguing with people everyday, losing good friends and family, being posted all over social media for shoplifting and getting myself involved with the wrong people. It spiralled out of control.

Every day I would say “I am going to change tomorrow” but then it would come to the next day and I would put it off until the following day. Drinking anything I could get, making sure I had alcohol for the next day and if I didn’t, it would be my aim that day to somehow get drink. It was always on my mind. I thought it was too late and I would be like that forever. I got myself into states and the following day my friends would tell me what I did and said and I couldn’t remember. It didn’t phase me. Then one day my family gave me the ultimatum. They said if I didn’t stop they wouldn’t bother anymore as there was not much left they could do. I was walking into my parents house late at night drunk, no respect, swearing and shouting. It was horrible for them. Their constant worry about picking up the phone and not knowing if I was dead, in hospital or in trouble.

I decided I was ready for rehab in February 2019. Unfortunately my application got declined back then. But in the summer it got accepted and my admission was planned for the end of August for a two week stay. I was so happy however I didn’t really prepare myself for it properly. I was just drinking everyday and putting it aside. The day before admission I was drinking from 9am in the morning, I was a state crying and screaming down the phone at people when deep down I was panicking. I didn’t know what to expect and how it would be. I came to the realisation that this lifestyle was going to be put to an end the next day. It was crazy in my head. The day I was getting admitted I was so nervous. On the journey to Broadway Lodge so many thoughts were going through my head. I felt sick.

When I arrived, everyone was so welcoming and caring. During my detox, the staff were brilliant. I was only there for a week as being a 20-year old, 3 hours away from home and struggling, I wanted to go home. I felt ready in myself, however it would have been better to have stayed the extra week to get more counselling but I insisted on leaving. The counselling there (especially Markkus) was amazing! I was gutted they don’t live near me because they are the best counsellors I have ever spoken to. They really helped me and I felt I got a lot off my chest. We did a lot of relaxation techniques. The food was incredible and the other clients were lovely too.

I left rehab at the beginning of September 2019. I have been sober for over a month now. I have done more in the time I have been out of rehab then I did in the past year of drinking. For instance, I have applied for college (going back to the course I was doing before drinking), I’m applying for part time jobs, I’m attending AA meetings and reading an Alcohol Anonymous book, I’m attending all my appointments ( which I struggled with before), I’m keeping in contact with staff at Broadway Lodge, paying off debts and fines, applying for my provisional driving licence (I lost that when I was drunk last summer) and keeping up to date with everything.  I don’t even think about drinking now. My doctor has prescribed me Acamprosate which takes away alcohol cravings. I have had people around me drinking, I have been in pubs since and it doesn’t phase me. The thought of a drink makes me feel sick now. I couldn’t be happier in myself. I have been in situations where I was feeling low and normally would hit the bottle but now I go into a room on my own, take myself away from the situation and write down my feelings – it really helps me. I have apologised to people I had issues with and when people argue with me I always try and make peace with the situation which I never used to. I used to either fight, make threats or carry on arguing. Staff at Broadway Lodge taught me to deal with negative thoughts, situations and feelings and people being challenging.

I am so happy with the outcome from Broadway Lodge, I know I left early but if you go there make sure to stay the whole time! Like I said I am just young, was struggling and so far from my home. It was really nerve wracking, but I got there! Thank you!!!