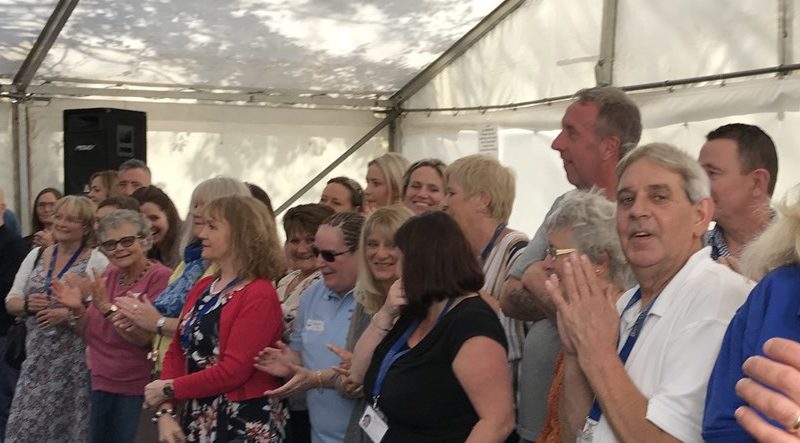 What an amazing day to celebrate Broadway Lodge, aka the Miracle Mansion, its staff and patients, past and present.

Thank you to everyone that attended this year’s Reunion and for making it such a wonderfully emotional day, full of sadness, love, laughter, fun and joy.

We opened this year’s Reunion by talking about 2016 being a difficult year for all at Broadway Lodge. The current management team have had to apply the principles of the 12 step programme in order to move forward and Broadway finds itself in a much better place than it had been in 2016 and for a long time. The flip side of this introspection was that we were now able to celebrate and thank all the staff openly, bringing them all to the front of the stage for all the hard work they do to make this such a wonderful establishment. What a rapturous applause they received from all that attended. Caroline Cole, our interim CEO, spoke with all about our Friends of Broadway Lodge group appealing to past and present to join us in order to share ideas and increase the opportunities for fundraising and raising the profile of Broadway Lodge. We also sent an appeal out to all our ex-residents to gain testimonials from them on their experience with Broadway Lodge. We asked them to send in a current picture and a story of their journey through Broadway describing what Broadway had done for them.

Our theme for the Reunion – suicide

The presentation this year was themed around suicide, which coincided with Suicide Prevention Day on September 10th 2017. The presentation was deeply emotional because we also identified a number of our past Broadway family members that had committed suicide in the last 5 years. The presentation followed on with a RIP to Broadway family members who had relapsed and died, some very recently. There were also some prayers for some people currently in hospital. As a mark of respect, we prepared a memorial tree in Broadway blue for anybody at the reunion to write a message and hang it from the memorial tree up in the gardens to anybody that had died as a result of the disease of addiction.

The shares were very varied and exciting this year. One of the things we have changed from previous reunions is to vary the people coming to share their experience. Addiction is a family illness that touches and affects all around so we are now inviting family members to share, as well as ex-residents. Similarly, it is our belief, as an organisation, that it is also important for people to hear from the staff what it is like, working with patients with the disease of addiction. We believe by having this variety of shares it presents a much-rounded picture of the effects of the disease of addiction.

The first half shares were opened by Ed, whose partner had relapsed and died after coming to Broadway recently. She was actually featured in the opening presentation. Ed had attended our family programme. This was followed by Andrew who came through Broadway in 1978 and was still sober today. The final share in the first half was a family share with Rachel who came through Broadway, her sister Sarah who got clean as a result of her sister Rachel coming through Broadway and her mother Lorraine who shared her experience of having two addict daughters who were now clean. Their father Gavin was in the audience listening. All three opening shares presented a very real, important and positive picture of the impact that Broadway Lodge had had on all their lives.

Whilst this was all happening we had a photo booth in the main reception from the Yellow Booth company. This was a fantastic fun-filled experience of laughter and joy for all that went into the booth. The buzz around the photo booth was awesome. Thank you to Laurence and Caz from Yellow Booth for manning the booth. They were so impressed with what we do at Broadway Lodge that they donated £100.00 to us and reported having the most amazing time at the reunion. The donations to the photo booth raised £118.40 and anonymous donations raised £36.80.

You can view all the photos taken using the Photo Booth machine on the Broadway Lodge Facebook page.

During the break after the first shares, Chris Adams held a Therapeutic Drumming workshop called Drumsnot Drugs. This always goes down well. You could hear the thumping and beating of the drums alongside the singing of ‘We Will Rock You’ by Queen. Thank you, Chris, for another amazing session.

The final closing shares featured Peter Davis, who was a member of staff for 17 years at Broadway Lodge. Peter’s share was funny, engaging and touched on his personal journey working with the patients at Broadway Lodge. It was wonderful to have Peter back at Broadway Lodge, a well respect and much-loved ex-member of staff. The final two ex-residents shares were a contrast of extremely funny by Mandy and very touching by Dudley. Mandy’s share whilst very funny having the audience in hysterics reminded all how insidious the disease of addiction can be and the lengths she had to go eventually to get herself clean and into recovery. Mandy reiterated the power of the 12 step programme. Dudley’s share, on the other hand, was so deeply moving that there was not a sound in the marquee, which was full of emotion when he shared some of his personal experiences of his addiction and how grateful he was to Broadway for giving him the opportunity to change his life. We ended the Reunion in our usual way with the serenity prayer.