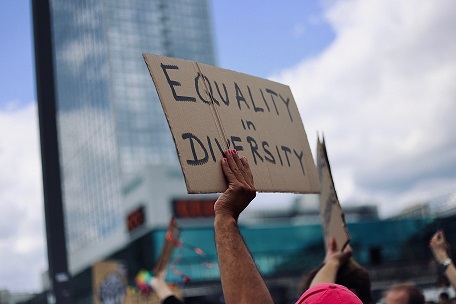 It has been an interesting year to say the least. We are living with the coronavirus pandemic which has literally changed the way we live and work. Who would have thought that we would be wearing face masks to go to the supermarket, local shops and even see some family members?

How life has changed for us all – except for some people, some aspects of life still remain unchanged.

During the first wave of the pandemic we saw the heart wrenching murder of another black man in the US by the people paid to protect and serve. It could have been any man, but I personally could not watch the senseless murder of another black man at the hands of the police. The heartache, sadness, and trauma many experienced through the media in the week of George Floyd’s killing was a cross too hard to bear. Waves of anger followed by unbelievable sadness at the continued racism experienced by people of colour.

Despite the pandemic, the potential arose for inspiring each other; people of all colours and races across the world began to stand together. United we stand, divided we fall. People of different colours, classes, backgrounds, ethnicities and sexuality all stood together and said, “Enough is enough.”  “We won’t stand by and watch the systemic oppression, discrimination and outright racism against black people just because of the colour of their skin.” It was beautiful to witness, be a part of and contribute to because in my personal and professional opinion if you do not stand for something, then you stand for nothing. The conversations that have ensued because of George Floyd’s murder have been liberating. There is a saying in residential rehabilitation addiction treatment that you are either part of the solution or part of the problem. At the same time, I remember thinking that I must do something about this. I must play my part to bring about knowledge and awareness of the lack of equality and systemic racism and the impact this has on society. If I can do my part to educate those around me then maybe there will be a ripple effect.

Despite this happening many miles away in America, the problem belongs to us all.  It is not just a black problem; it is a humanitarian one. Across the globe we are all part of a society, a society that discriminates against people of different races and colour. Though starkly visible, it’s not just about race and colour; physical and mental disability, whether overtly visible or hidden, cultural or religious beliefs, discrimination of any kind separates people and ruins lives. When all is said and done there is only one race, the human race and we all need to stand together.

Whilst ruminating on this issue, and as a black man working in an addiction recovery setting, it struck me that there are parallels between what the ‘Black Lives Matter’ movement is striving for and what we are striving for in our rehab.  Equality of value and equality of opportunity are common aspirations of both.  The discrimination described above that applies to black lives also applies to addicts – with common threads running through both. Colour discrimination lingers from the time when people of colour were considered sub-human. Discrimination against addicts likewise figures the stereotypical addict as sub-human.  These perceptions are both based on fear and on the human tendency to exclude some so others can feel part-of and protected.  Fear and exclusion; hatred and discrimination are no longer necessary nor should they be condoned.  Everyone belongs, whatever her or his colour and whatever condition or illness s/he may carry.

Therefore, we all need to stand together in the fight against inequality and systemic racism wherever it rears its ugly head. Nelson Mandela fought from a prison cell for 27 years against the system of Apartheid, but he needed the realisation, recognition and leadership of  F.W. de Klerk to help him to dismantle the system by stepping aside and relinquishing power and control. Similarly we all need to stand together in the fight to shift societies perception and prejudices against people with addiction because they are people too; they are people just like us who have been lost to the disease of addiction and are struggling to find a way back into society.

Whether you believe in the nature-nurture debate around the disease of addiction, right now, that does not matter. What matters is that they are humans. Seeing addicts as sub-human makes that journey home impossible.  Addicts are at the bottom of the barrel when it comes to inclusion and belonging. The only people who truly care about the addict are the family, friends, loved ones that are closely affected, and those with an open heart but we all need to care because addiction could happen to any of us.

Addiction does not discriminate but society does. The more unequal a society, the higher the level of drug use. This finding is just one in a study by UK epidemiologists Richard Wilkinson and Kate Pickett into the social determinants of health, into ‘why health gets worse at every step down the social ladder’. The authors concluded that where there is inequality in a country, there is a corresponding loss of general health and well-being, as indicated by measures of community life and social relations, mental health, illicit drug use, physical health and life expectancy, obesity, educational performance, teenage births, violence, imprisonment and punishment, and social mobility.

Fundamentally we all gain when all lives are equal and all lives matter. We all lose when we discriminate or marginalises others. Children are not born to discriminate but sadly, parents, society, media and our education system can teach our children to discriminate, to become prejudice and in some cases to become racist. When ‘Black Lives Matter’ as a movement no longer needs to exist, we will know then that all lives matter. When the government take a different approach to the treatment of addiction by decriminalising it and make it a health issue, we will know that all lives matter when it comes to the disease of addiction.

Inequality and injustice exists everywhere. This blog has explored the manifestation of unequal treatment through the lens of a tragic, unnecessary and unjustified death.

“Injustice anywhere is a threat to justice everywhere. We are caught in an inescapable network of mutuality, tied in a single garment of destiny. Whatever affects one directly, affects all indirectly.”

Did you know that the woman Darnella Frazier, the woman whose mobile phone video of George Floyds killing was awarded an honorary Pullitzer Prize for “courageously recording” the murder?

Over a year on, with a conviction for murder being handed down, it is a poignant moment to consider, reflect and act to change prejudice, whether it is to colour, disability, race, belief or to the criminalisation and stigma surrounding the illness of addiction.