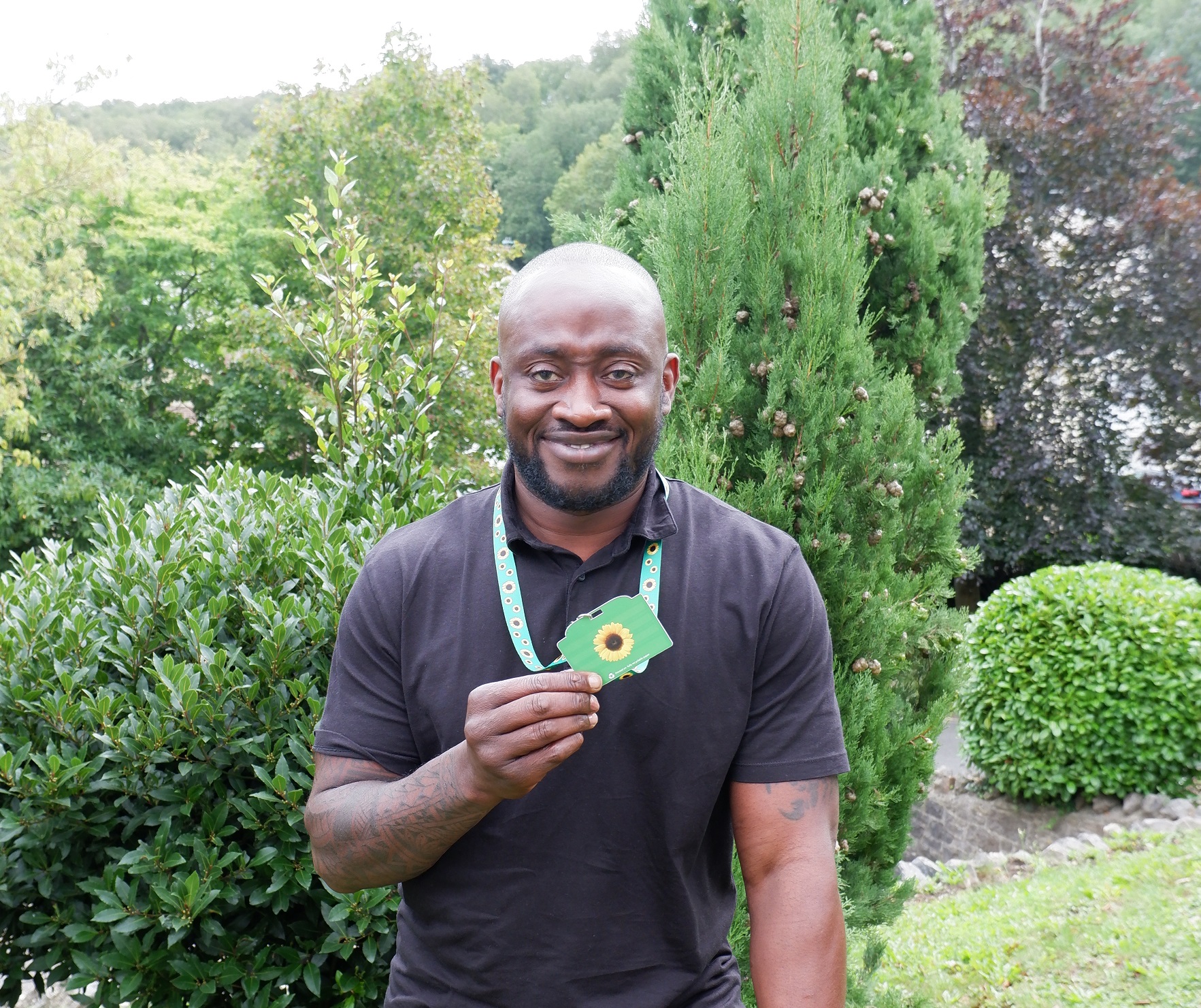 We want to help spread awareness of this great initiative as it could be helpful to you or people you know.

Picture the situation. You are in the supermarket and a child, who’s with his mother, is creating lots of noise and seemed to be having a meltdown for, what appeared to be, no reason. All you notice alongside the child’s screams is tutting from others, people’s scowling stares and negative whispers and comments about how badly behaved the child is. Then the mother announces that in fact, he has autism and really struggles in certain situations.

For people with a hidden disability, such as Asperger’s or Autism, sweeping judgments like these can happen on a daily basis.

If you or a loved one has a non-visual illness or disability such as Autism, anxiety, dementia, hearing impairment or chronic pain, then you may be interested to know there is a sunflower lanyard you can wear to discretely signal this (shown below and in the photo of Markkus above). Many public places including airports, supermarkets, sports venues and hospitals recognise the Hidden Disabilities sunflower lanyards so that staff know when to offer more assistance or provide more time to support individuals and their families when they see somebody wearing the lanyard. The lanyards also help to create awareness of hidden disabilities with the general public, hopefully encouraging some who are quick to judge to be more understanding.

The sunflower lanyard initiative is being supported by RNIB and other charities including Alzheimer’s Society, The National Autistic Society and Action on Hearing Loss.

Once a person has a lanyard (and anyone who feels they would benefit is eligible), it’s theirs to keep and use for their future travels, visits and outings where the scheme is recognised.

Where is the sunflower lanyard scheme recognised?

Some of the places where the scheme has already been adopted are detailed below.

In 2016, Gatwick launched the first-of-its-kind lanyard for passengers with hidden disabilities who may require additional support when travelling through the airport. For instance, by wearing the lanyard at Gatwick or other major UK airports, the person could receive support with:

The lanyard scheme is gradually being adopted by railways. It is now being used by LNER, which operates the London North Eastern routes, and c2c, which serves 26 stations in East London and South Essex.

In December 2019, Network Rail announced that the lanyard can now be picked up at four of the country’s biggest stations: Manchester Piccadilly, London Euston, Liverpool Lime Street and Birmingham New Street, as part of a trial.

In January 2020, after working closely with RNIB to train their staff, P&O Ferries announced the launch of the lanyard scheme across its North Sea routes.

The famous Ascot Racecourse in Berkshire has introduced the lanyard scheme, and the Royal International Air Tattoo, which stages air shows in Gloucestershire for aircraft enthusiasts, is currently trialling the lanyard.

Forest Holidays, a UK holiday provider, has adopted the lanyard, as has Knowsley Safari, a zoological park in the North West.

A number of NHS Trusts including Guy’s and St Thomas’ hospital in London, Great Western Hospital in Swindon, and East Sussex Healthcare hospitals have adopted the sunflower lanyard scheme.

Sports venues and stadiums have also started to recognise the lanyard, such as the homes/headquarters of Fulham FC, Chelsea FC, the Worcester Warriors and Sussex County FA.

The University of Sussex has adopted the lanyard on its campus, as has Harrogate library and performance venues Brighton Dome and Aylesbury Waterside Theatre.

How do I get a Hidden Disabilities sunflower lanyard?

Shops and organisations that are members of Hidden Disabilities Sunflower like those listed above should provide anyone who asks for one with a lanyard, free of charge. If the organisation is signed up to the scheme, customers should be able to collect a lanyard from the venue or shop in person – see our guidance below. Otherwise, a lanyard can be purchased for 55p on the Hidden Disabilities online shop on their website here.

Airports: If you’re due to fly from a major UK airport, you should be able to ask for a lanyard from an airport assistance desk, or order it in advance, depending on your chosen airport. Find out more about the best way of getting the lanyard by contacting the airport before you travel.

Railways and ferries: Contact customer services before you travel or ask at station booking offices or check-in desks.

Supermarkets and retail stores: Request the lanyard at the customer service desk of larger stores or shopping centres, or at the checkout at smaller stores.

Visitor attractions and leisure providers: Ask at the tills or information points, or contact customer services in advance.

Hospitals: The main reception desks should be able to give you a lanyard, or tell you about the other areas of the hospital where you can collect one.

You can search for all the organisations who are signed up to the sunflower lanyard scheme in your local area by using the Hidden Disabilities ‘find the sunflower’ search facility on their website here.

Why is it called the ‘sunflower lanyard’?

It takes its name from its appearance – a simple green ribbon, decorated with sunflowers. The design was chosen because it was ‘subtle but visible,’ according to the Hidden Disabilities website. ‘We created a simple sunflower design on a green background for a lanyard – a subtle but visible sign to enable airport staff to identify that the wearer (or someone with them) may require some extra help, time, or assistance when moving through the airport,’ the website states. ‘The success of the Hidden Disabilities Sunflower and the positive response it has received has increased awareness of the challenges adults and children with hidden disabilities can face. Hidden Disabilities Sunflower wearers now benefit more widely from help being offered to make their daily living a little easier.’