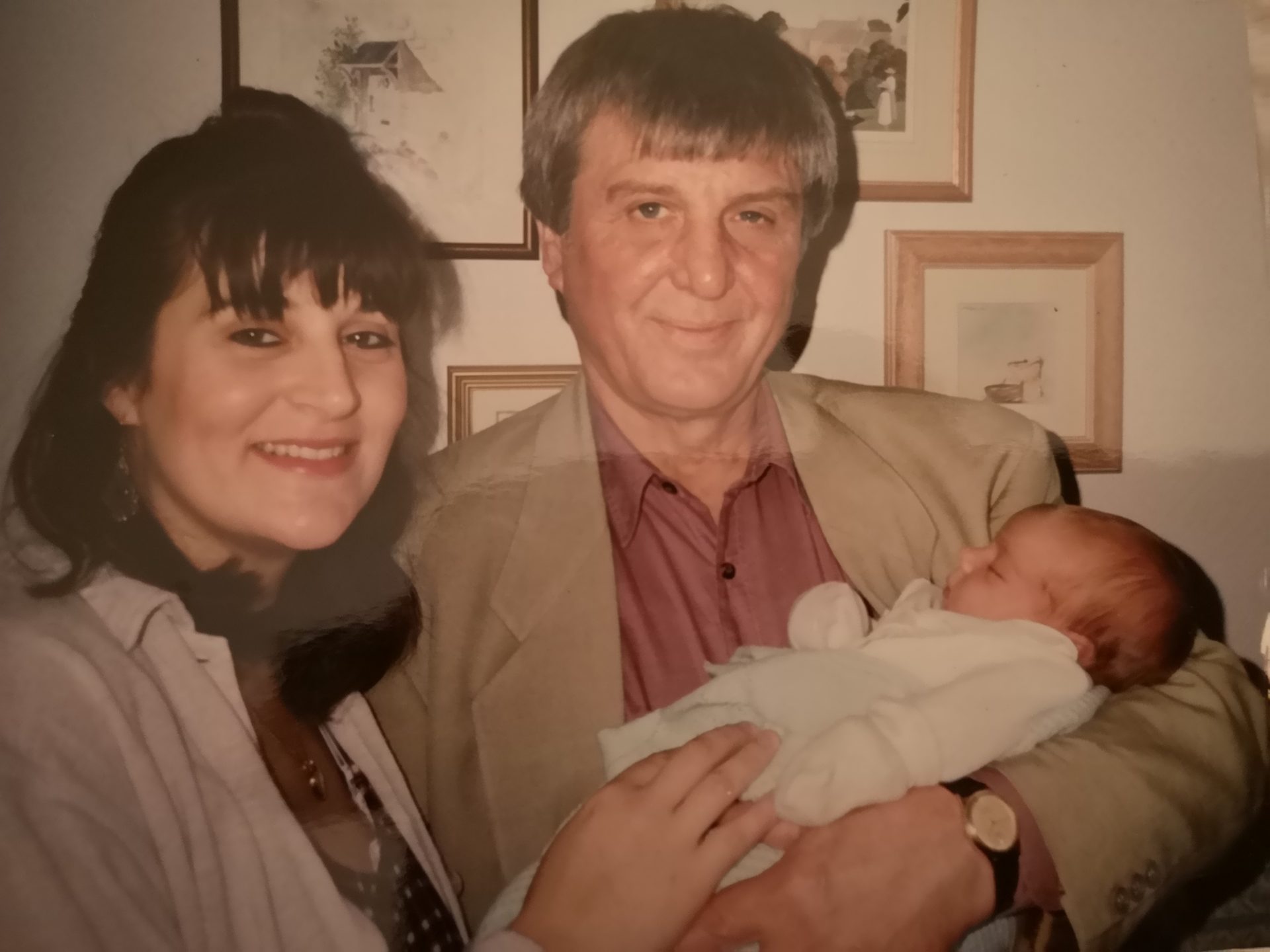 We recently received an email from Nicki Giltrow to inform us that her father Michael Giltrow sadly passed away age 75, shortly after his birthday.  His funeral was held yesterday on Thursday 28th March and want to respectfully share the beautiful information we were sent about him but also highlight gratitude – one of the spiritual principles of the 12 Steps.

Michael was a resident of Broadway Lodge 40 years ago for three years back when Broadway Lodge was run by Jesuit Priests and nuns. At this time there were only 10 residents and Broadway Lodge had not long established. Michael often spoke about his time at Broadway Lodge and although he did relapse, Nicki says it was never as bad as when he first arrived here in the late 70’s.

Eventually Michael achieved 35 years of sobriety having never forgotten the tools and all the valuable information he learned at Broadway Lodge.  He had a successful career and worked right up until just three years ago, even when he was suffering from COPD and on oxygen. In his spare time he enjoyed reading, betting on the horses and watching football. 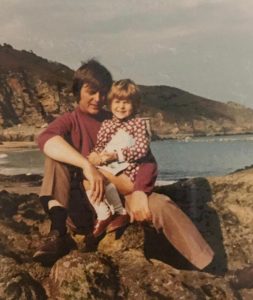 Michael and Nicki, before treatment

Although always in recovery as we know, he did not drink alcohol for the last 35 years of his life. He regularly attended AA meetings, chaired them sometimes and was a sponsor. He advised and helped a lot of people who have struggled with alcoholism. He went on to remarry and have two more children. He had been on long term oxygen therapy 24/7 for the past couple of years and died of Chronic Obstructive Pulmonary Disease complications but he also gave up smoking six years ago, in order to prolong his life. I remained especially close to him throughout all his struggles and shared the joys too. All his four children were at his bedside when he was dying plus two ex wives! – which is testament to the kind man that he was.

Michael with Nicki, when he became a grandad for the first time

The serenity prayer remained Michael’s mantra for life and it will be read aloud at his funeral. His other favourite  AA sayings were ‘new day tomorrow’, ‘you  can’t write the script’ and Nicki’s favourite which was ‘one day at a time and if you can’t manage that, do  half a day and if that’s too much, break down to just an hour and if that’s too much, just quarter of an hour.” Michael also loved the saying “just sit quietly and keep it simple.” Wise words when life gets too much.

Nicki is planning a Just Giving fundraising page to place a new bench in our memorial garden. She also gave permission for Markkus (Head of Counselling) to share her father’s story with the current patients which he gladly did in a morning lecture earlier this week, titled ‘Gratitude’.

Sometimes we welcome patients who are initially very ungrateful for the opportunity to receive treatment for addiction. One of the gifts of therapy and treatment at Broadway Lodge is the love given to them throughout their stay which most often turns their ungratefulness to gratitude.

We were fortunate enough to receive an email from Jeremy (a former patient) the same week that Nicki contacted us. He had successfully completed treatment and is now at the beginning of his recovery journey. He asked us to share his thoughts with the current patients and our followers.

“My name is Jeremy. I was the kind of addict who thought I was unique. My family is very wealthy. I helped build an empire with them until due to my addiction they had to let me go from the family business for the sake of their reputation. Due to having ADHD – which I exploited – and good sales ability I had incredible manipulation skills until my addict grew so powerful that he nearly took me out. My last relapse left me dangerously close to death.  I have the benefit (or curse) of an education from one of the finest public schools in the country followed by studying at Oxford University. I earned monstrous amounts of money which meant I had endless supplies of cocaine. My grandiose issues exceeded most by far. Broadway Lodge has provided me with humility. Today I have surrendered to a 24-hour programme of radical acceptance, complete abstinence and change in attitude and do this every day. It is one day at a time. I did what was suggested by Broadway Lodge and found a good sponsor the day I returned to London. Today I am safe. I feel like one of the lucky ones. I am not cured but have a chance of living if I follow the programme of staying clean just for today.”

Markkus felt the Gratitude lecture was beautiful and emotional one as he was able to share the end of one person’s journey and the beginning of another, both of which were full of gratitude.

Following her first contact with Broadway Lodge, Nicki sent us a reading she wrote for her father’s funeral which can be read below. Markkus shared this at the Wednesday community group meeting with all patients as a continuation to the lecture about gratitude.

“Jealous of the Angels” by Nicki Giltrow

There is no pain or suffering in the beautiful garden of the angels, only soft rain and peace. When the angels came to collect you Dad, it was such a tortuous wrench, I felt like my heart had been ripped out but, for you, it was a welcome release. Just another kiss goodbye, another smile, another chat, another cup of tea, another hug – it seems not too much to ask but the angels disagree, they knew you deserved to be set free. Free from struggling to breathe, you were so tired yet carried on being courageous, strong and brave until you could not fight on any longer.

It feels like my tears will never cease to fall and that my broken heart will never mend, but I know you will gently wipe my tears away and one day I will wake up to find that my heart has magically mended – but not put back quite the same as it was before because a missing piece will always be with you. We had such a long journey together, weathering stormy seas and sharing many joys, a treasure chest of special memories encased in my heart forever.

Thank you for all the love and care you gave me and my two children, they really loved their kind Grandad. Thank you for your words of wisdom, your favourite sayings, your funny stories and all the laughs we had –  there were a lot of them! Your sense of humour was the best. Thank you for always being there when I needed you, for cheering me up when I was down and being my ‘warm blanket and hot chocolate’. I was always there for you too, we were on each other’s shoulders – which I know was a blessing and comfort to us both.

I will be searching the stars at night time looking for you, I will feel all warm and fuzzy inside when I see the brightest one as will know it is you – and that your spirit lives on together with Nan in the starry skies. Miss you so much already but know that you are just in the next room – until we are reunited. When the sun is shining, when the leaves rustle and whisper, when the Daffodils sway in the Spring breeze, when the harsh rain beats down – I know that you will be there at the end of the rainbow as my guardian angel.

I’m jealous of the angels who protect and surround you in heaven whilst you sleep, but rest in peace you must, my lovely Dad.

Everyone who listened to this reading in our community group connected to the love, sadness, pain and joy, Nicki’s love for her father and anything that may have been going on for them in that moment.

Nicki has sent some pictures of her father and family which feature on this post and we hope that Nicki, alongside a number of other family members, will accept our invite to share her story at the 2019 Broadway Lodge Reunion in September. 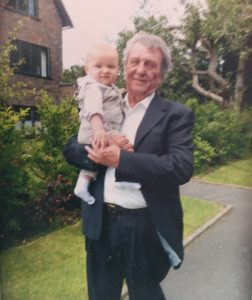 Michael and his grandson in 2012