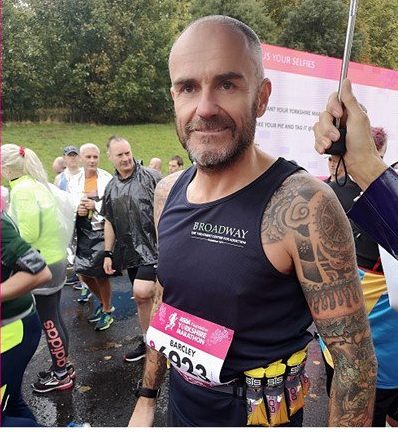 In the summer we published a blog about Barcley Roberts, a former client who left treatment in 2009. He’s since turned his life around and has discovered new hobbies including running. He generously decided to give back, fundraising for Broadway Lodge by running the 2018 Yorkshire Marathon.

Following weeks of gruelling training, the marathon day finally arrived on Sunday 14th October and we are pleased to report that he ran 26.2 miles without a hiccup. Despite the constant heavy rain and winds present for the entire course, Barcley impressively completed it in 4:02:21 which is 5 minutes faster than his time for the same event last year which he is over the moon with.

Barcley followed an intense training schedule, running regular tiring distances of up to 20 miles as the day approached but all of his efforts paid off. After the run, Barcley commented:

I feel great spiritually and emotionally, but physically my calves are hurting and I think I’ve put my right ankle under enough punishment for the year…during the run I had a continuous battle in my head for the second half with the positive side winning through. My legs were in so much pain but I made it.

Thank you to Barcley for doing this amazing gesture to support Broadway Lodge, we are so grateful and very proud of your achievement. Thank you to all who kindly donated, almost doubling Barcley’s target of £400. He raised an impressive £724.52.

To watch Barcley’s video where he describes his experience of addiction and treatment, please click here.